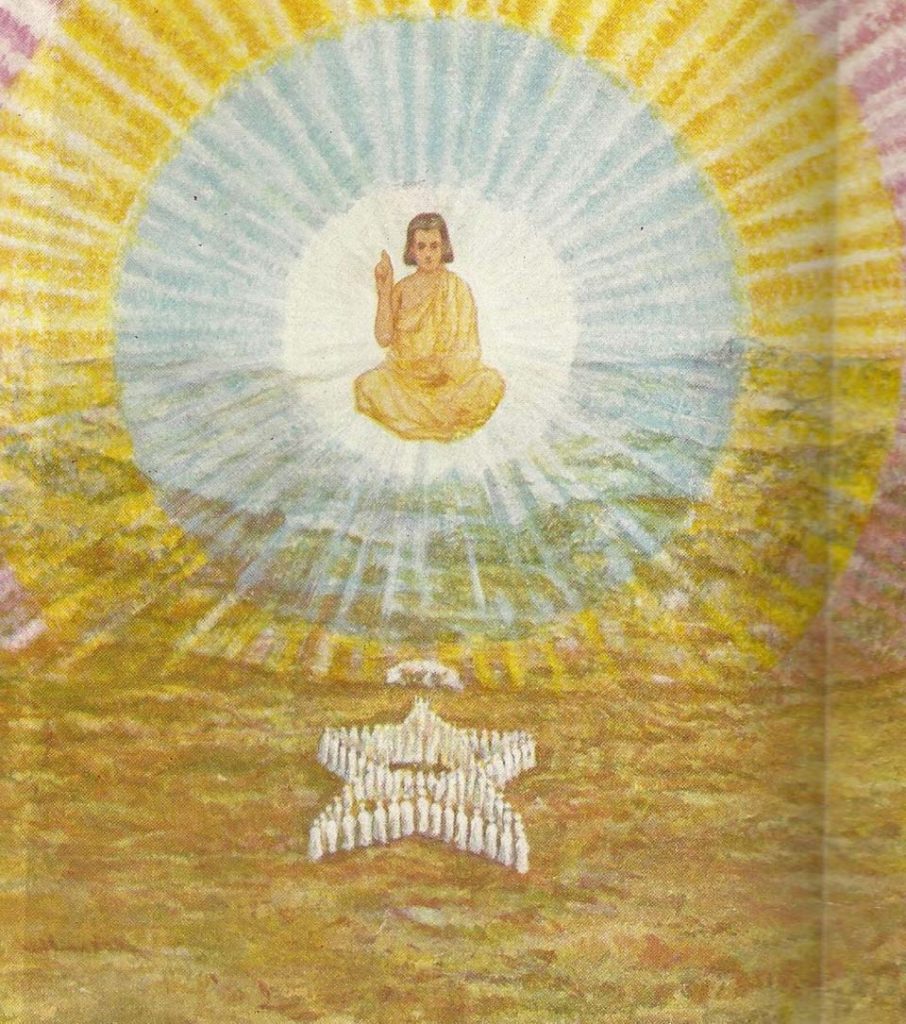 Cancelled due to continued covid-19 – Enjoy a WESAK meditation in the safety of your home.

“Spiritual workers are needed now, and taking part in a local WESAK Festival unites spiritual workers around the world to help build this most important planetary alignment which helps to construct the ‘rainbow bridge’ (antakarana) between the Hierarchy of Enlightened Minds and Humanity. This is more than wish fulfillment, it is an ideal that we can all strive for making a strong effort to be part of this world spiritual event. The ‘forces of light’ wait patiently to be called into activity on earth by the aspirations of a united spiritual invocation by a waiting humanity. First meditate on the importance of the WESAK Festival, and then ask yourselves from your ‘inner-most-self’, do I truly want to serve on the ‘upward lighted way’ for the benefit of mankind”. (22)

Our group occult calendar revolved around the Full Moon cycles and the year ended and started with WESAK. During the first 10 years of the group, from our first WESAK to the tenth one, we managed to do short intense meditation retreats over the WESAK period. A Full Moon period covers the day before and after plus the actual Full Moon day. For our WESAK retreats we would arrive 2 days before the actual day of WESAK, one day to prepare and then start the retreat one day before WESAK. These retreats were very disciplined with a strong 7th Ray format, there would be no talking during the actual 3-day full moon period, 4 daily meditation periods, silent study, group study where RN would lead, and pure vegetarian meals. All questions were in writing and RN would read them and then discuss. If any member had some sort of spiritual or occult experiences during meditation, then they would write a detailed description and pass it to RN who would later comment on it. If it was a worthwhile experience, he may discuss it with the whole group. On the day after the WESAK three-day period, before we headed home, we’d break our silence and have a big vegetarian feast. Most members of the group found that the WESAK experience was a catalyst for their spiritual efforts for the coming year.

I will just mention a couple of the WESAK retreats, describing events that seemed to stand out from my own perspective and experience.

The first WESAK retreat (1975) was in a wooded area where we had rented a large cottage in Sutton Quebec. Both the Toronto and Montreal groups attended, so we had at least 20 attendees. It was a beautiful place but there was one big problem, there was only one bathroom for all of us in the cottage. This meant a long line-up in the morning! You cannot complain either as there was no talking allowed. The cottage came complete with an equipped kitchen and we would set up a buffet styled eating experience. Fortunately for us, RN was an excellent cook and he loved to cook! He had his cooking helpers and they would prepare everything, chopping vegetables, arranging the spices, and making sure all the pots and fry pans were clean and ready. RN brought along his personal wok from home. Most of our meals were a cross between Chinese and Indonesian stir-fry with delicious jasmine scented rice. Watching RN cook was an experience in itself, as he stood by the wok shouting orders for this spice or that sauce. He never used recipes. He cooked with his intuition guided by a very heighted sense of smell. His food was always very tasty and each meal was different. I never tired of his cooking.

The first meditation session was early in the morning. We sat on the floor in two concentric circles back to back. In the center of the circle was a simple make shift altar with a white unscented candle and incense. We used sandalwood incense as the Master D.K. mentions in Treatise on White Magic, somewhere in rule #10, that sandalwood is a 1st Ray incense that helps break up negative vibrations and thought forms in the location where it is being burnt. The group has used sandalwood incense ever since. RN would lead the meditation; we did both chanting and silent focusing on the golden flame in the lotus of the heart. We chanted the mantra of Lord Gautama the Buddha, the fully Enlightened One. (see mantra below)

The meditation periods were generally just over an hour in length. We worked hard on centering our focus on the golden flame in the heart. This would help quiet the inner talking and prepare us for chanting with a strong inner focus. Then we’d visualize the Buddha, Lord Gautama above our heads, radiant gold in color, with his right arm raised in blessing and we would start chanting the mantra of the Buddha, 4 times loud and then 4 times silent, which would equal 1 round. There are numerous tunes available to chant this mantra. What is most important is to visualize the Buddha clearly and to chant with a deep reverent feeling. You should feel as if you are making an offering or dedication to the Dharma as you chant. It’s important that you do not chant mechanically, losing focus and just chanting with your mouth. The mind is focused through both the effort to maintain the visualization and the thought of offering. With this type of effort one then attains what the Tibetan Master D.K. calls ‘alignment’. When everyone in the group is doing this with sincerity, then it’s the group effort that invokes a response from the higher forces.

On the actual WESAK meditation many of the group members had some type of experience that they wrote down for RN to examine and discuss. I had an intense experience, which was my first experience of Samadhi; I was focusing and visualizing the flame, but it turned into a radiant golden sun and as my focus became more intense, I seemed to move closer and closer to it. This created a great deal of tension, not on the physical body, but in mental space, chitakasha. It felt like it was vibrating and shaking. The tension reached a very high intensity, my focus was like a drill. The sun became like living fire, then, there are really no words, but I blasted through this sun as a point of conscious feeling identity with purpose. On the other side was a radiant golden world of light with liquid golden Beings that shone like stars. The feeling was of quietude yet I was, just this point of awareness, moving rapidly towards another sun in this world of brilliant light. One of these beings seemed to be watching and directing me. What I remember is that this golden Being had very powerful eyes. In this space I was in, there was a sky and sun and I was told telepathically to focus on this sun too. My total feeling was of self moving rapidly through space. There was no sense or feeling of my body. I was not in my astral body, this is not astral travel. As I focused on the second sun, I rapidly soared nearer to it and again a feeling of tension began to rise between me and this sun. Then I passed through this sun also and came into another world. This world was a vivid multi-colored canvas, and I was flying as a point of conscious awareness over a jungle with a glowing golden white pyramid in the distance, that rose above the jungle greenery. I started to move towards it rapidly but I was stopped, somehow, I couldn’t go further and in a second I felt myself flow back through the top of my head, back into my body. To me this was a remarkable, wonderful experience. RN agreed and in fact was quite surprised. I remember him saying that it usually takes many years of mediation before achieving this feeling of integration and Samadhi.