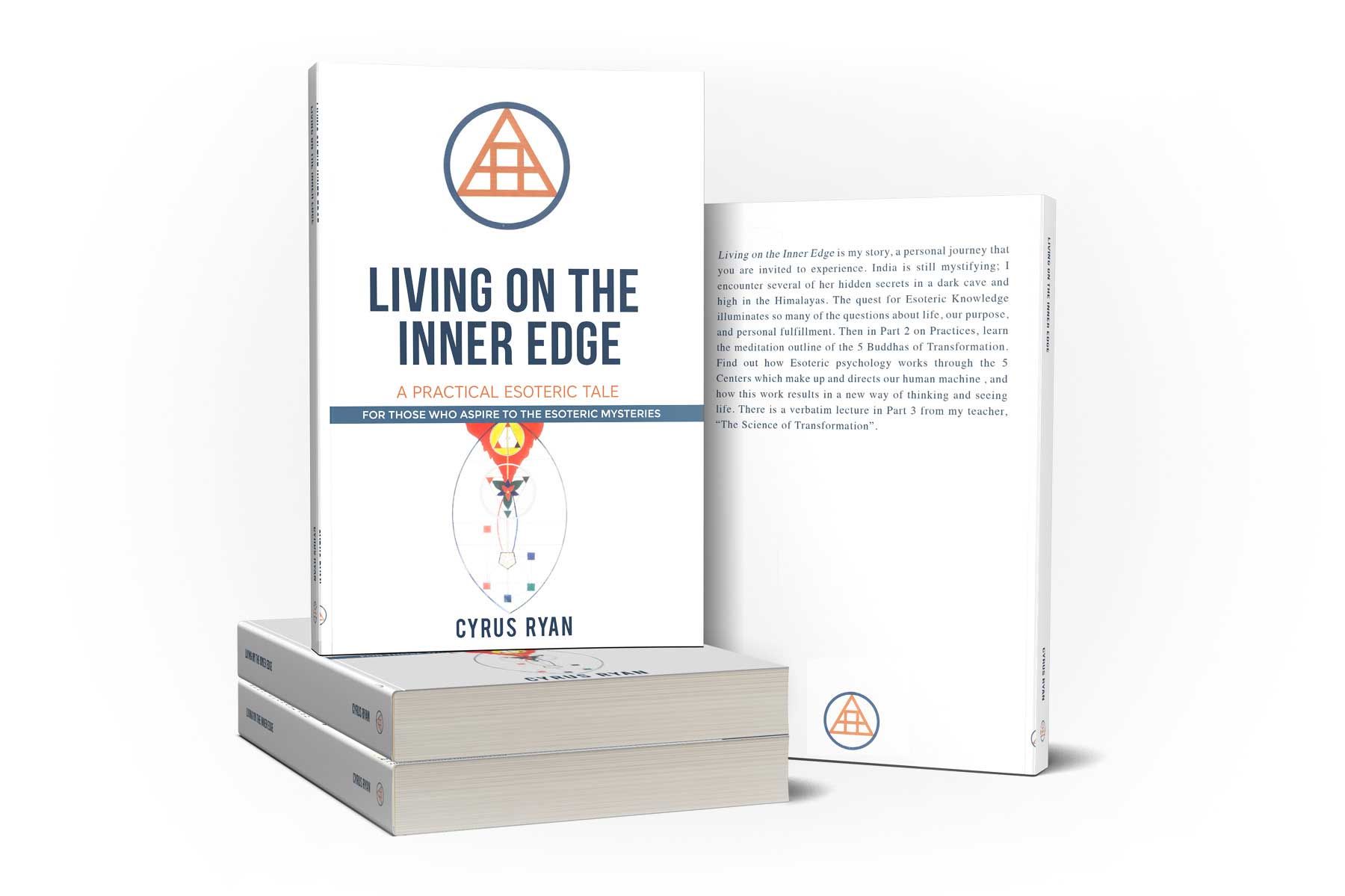 Living on the Inner Edge, A Practical Esoteric Tale

This is written for those who dare to go beyond the confines of this life. What you’ll find in this book that you won’t find in other esoteric books. “Living on the Inner Edge” is now published and available in paperback, e-book, and kindle.

A mystical story, breaking traditional boundaries, new thought, practices, insights, and a way of knowledge. Everyone walks their own path but in the New Age of Spirituality the idea of Group Work was born from the works of the Tibetan Master D.K., where he introduced the idea of group work on the physical plane and in the higher spheres of the Soul, and the Gurdjieff/Ouspensky Work which was accomplished through intense group meetings and personal interaction. Living on the Inner Edge is a foray into the world of experimental Group Work which lasted for over 30 years, constantly evolving and synthesizing the essence of different Esoteric Traditions into a new body of discipline that achieved extraordinary results.

“Cyrus Ryan, after years of meditation, study, searching and experimenting under the direction of his spiritual teacher and the influence of the Masters, has, in this book, unveiled the way of the Group of World Servers. The means of spiritual advancement through group at-one-ment has been clarified for the uninitiated. A veil of obscurity has been removed and the usefulness of the process clarified.”

Creativity and spiritual experiences have marked Cyrus Ryan’s life since a young age. He has spent time in India and Tibet, where he gained insights into the practices of esoteric Buddhism. An artist, writer and lecturer, Cyrus has lectured at The Theosophical Society, the Association for Higher Awareness (AHA), the New Jersey Metaphysical Society, and the University of Seven Rays. He has published articles in a variety of new age periodicals including The Beacon. Cyrus has been exploring esoteric knowledge for over forty years. He lives in Toronto, Canada.

Learn about the deeper esoteric experiences that leads to the Path of Initiation.

“Ryan’s account, both accessible and fascinating, takes us through the groups adventures, including inner practices (“Our chanting was creating a ‘cone of fire’ which not only protected the group, but also allowed for the downpour of energy from the higher planes”); journeys to India and Tibet, and the dynamics of relations between members….I believe that groups of this sort represent the best possibility for spiritual development today.”

“Ryan has a gift for explaining the complex and abstruse in the most lucid and accessible fashion without losing the true essence of meaning. There is an awakening, stimulating, attuning charge to the writing, the memoir told by someone with decades of practical experience and a sincere heart.”

What’s Inside the Book

You will be inspired to push yourself deeper into the world of Esoteric Wisdom when you read about what happens when Master of Wisdom, gives the group, through my teacher, a Word of Power. Our ability to use this Word of Power matured into deeper Esoteric knowledge that blossomed, only after intense group effort and discipline. To my knowledge, there are no books presently available that discuss the Group Work that lasted for 30 years on the physical plane, and indicates the future of spiritual development and Initiation like this book. This book is written in a story form, integrated with new teachings of the esoteric Path. The teachings in my book are a syntheisis of the Ageless Wisdom including Theosophy/Tibetan Master DK’s work as presented through Alice A. Bailey, Vajrayana Buddhist practice, Yoga Vidya, and the Gurdjieff/Ouspensky Forth Way.

1) Information and actual experiences of the Dweller on the Threshold

5) Astral attacks, some examples, and how to overcome them

6) Love, sex and problems seen from an esoteric viewpoint

8) Atma-Vidya, the key to deeper understanding of the teachings of the Master DK

9) Meditation charts of the Occult Constitution of Man

A Review: Living on the Inner Edge – A Practical Esoteric Tale

For all genuine seekers interested in applying esoteric truths to daily life, Cyrus Ryan’s first book is a “must read”. Living on the Inner Edge – A Practical Esoteric Tale is the captivating account of his spiritual journey beginning with a first awakening and leading to a thirty-year group experience with a bona fide spiritual teacher from Indonesia simply known as RN.

Accounts of personal spiritual journeys are on the rise these days, but this is unusual and especially relevant because it presents an experiment in group discipleship. Experiments involving group discipleship is a comparatively new concept but it is indicated that this will be increasingly the way of the future.

The author is both frank and honest, also courageous and compassionate in his narration of the group challenges and the behavior of certain individuals, including himself, and how they affect the group dynamics as well as the teacher. Interesting spiritual insights are presented which prove to be most useful for all serious aspirants to the spiritual path.

The narration interweaves adeptly between personal experiences including riveting travels in India, and a very clear exposition of the esoteric teachings as presented by their mentor. These teachings are unusually fluidic and eclectic for they integrate and synthesize multiple approaches. These include Theosophy, Vedanta and Atma Vidya traditions, the Alice A. Bailey/Djwhal Khul material, Mahayana and Vajrayana Buddhism, and the comparatively new Fourth Way teachings of Gurjieff and Ouspensky. For a time other traditions are also included such as The Kabbalah and The Tree of Life but are modified according to the experiences and benefit of the group members.
Readers will not fail to be fascinated by some of the author’s surprising adventures, particularly those related to meditation, in India and Tibet, but Cyrus is always mindful of the practical lessons to be learnt and never gets totally carried away by the personal saga at the expense of the group endeavour.

A particularly helpful part of the work are those chapters which present topics rarely tackled in other spiritual literature, such as the question of love, sex and spirituality, how to ward off astral attacks and elemental forces, and the facing of unredeemed demons from the past which eventually constitutes what is called in esoteric literature as “the dweller on the threshold.” The author certainly demonstrates courage in broaching these themes as well as a great deal of admirable common sense and practicality.

In addition to photos of the author’s sojourns in India and Tibet, the book is replete with many diagrams mostly developed by the group’s mentor, RN, and also by Cyrus to provide visual clues to obscure esoteric philosophy such as the inner components of the human being. Highly useful visual aids are also provided for specific spiritual and meditative practices.

The book culminates with a the sharing of an inspiring lecture given by RN in November, 1981 entitled The Science of Transformation in the Great Work and it epitomizes beautifully the real goal of the spiritual quest.

In all, I have no reservation in highly recommending this unique account of a spiritual journey in consort with an experiment in group discipleship inspired by one of the Teachers of Wisdom and Compassion and an Inner Ashram of the Spiritual Hierarchy.

This work presents just part of the saga and we are given to understand a sequel is in the offing. Personally I can hardly wait for the manifestation of the second part!

Author: Insights from the Masters, Timeless Truths of The Secret Doctrine