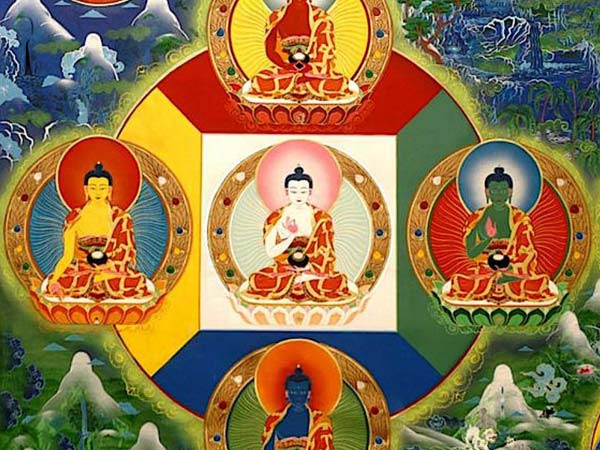 The Master DK mentions that in his teachings he (1) employs occult blinds to hide certain truths/teaching from those who are not yet ready to see/understand them. (2) He also mentions that his teachings are written for (a) intelligent men to inspired them to a new way of thinking, (b) probationers, to help them progress on the path, (c) disciples, giving them direct teachings, and (d) initiates who will get a totally different picture from these writings than the other 3 categories. This illustrates the greatness of the Master DK, and his significance as that, ‘voice crying in the wilderness’, reaching out to change the thought content of humanity.

I intend to write some articles that will give some deeper insight into the source of the Masters DK teaching, and the hidden directions for those more advanced disciples who are daring to take the next step. Two books give very direct directions for one’s ‘sadhana’ on this particular esoteric path; these two books are: Letters on Occult Meditation, and The Light of the Soul. This first article will start with some directions given out in The Light of the Soul, book 2 pg. 162, part 3, just a portion here of the total commentary of the sutra 20. This reads as follows: The mind. This is the instrument which the seer employs in order to perceive presented ideas or thought forms. For purposes of clarification, it might be noted that the presented ideas fall into five groups of thought forms: (I’m just copying the first sentence in each of these 5 categories, otherwise it would be too long.)

a) The tangible objective forms in the physical world of every day.
b) The moods, feelings, and desires, which all have form in the astral world.
c) The thought forms in their myriad distinctions which crowd the mental world.
d) The thought forms which he can create himself after he has learned to control his instrument the mind and can discriminate between the illusory world of present ideas and those realities which constituted the world of spirit.
e) The ideas presented by the world of spiritual life, the realm of spiritual knowledge, and the kingdom of God in the truest sense.

The source of these idea lies with five archetypical Celestial Buddhas, who in fact lay the framework for all humanity. These five great lives are known as the Five Dhyani Buddhas, or the Five Buddhas of Transformation. The teaching on these five Buddhas is extensive, but there is not a great deal of literature in English on them that goes to any great depth, beyond describing them and their major characteristics. In the practical sense these five Buddhas make up a major part of the Guhyasamaja tantra. Guhya means ‘secret’, and samaja means ‘community’. This tantra is one of the four major tantras of Vajrayana Buddhism. For more in-depth information on the Five Dhyani Buddhas, I suggest reading, Foundations of Tibetan Mysticism by Lama Govinda. His Tibetan teacher was an adept with a fascinating story. I meet the family that supported him after he was discovered meditating in a cave on their property in Tomo valley, Tibet.

Starting with the Sanskrit term for each category – Rupa = form; the word Skanda is not really translatable into English, but it is generally defined by the word ‘aggregate’. There are 5 Skandas, and their blended activity results in a personality. The objective of this idea indicates that there is no stable sense of ‘I-ness’ within the personality. All is ephemeral, changeable, and temporary. At death the 5 Skandas dissolve back into their essential elements.

What is the Master DK trying to teach us? What is the purpose of these 5 Dhyani Buddhas relative to one’s spiritual awakening? Why is this knowledge hidden?

The essence of this great, higher teaching revolves around the concept of transference. As humans, occupying a physical form/body, at our stage of occult awakening (below the 4th initiation), we need to use a form of some kind as a ladder of light, to transform our personality/soul into soul/personality, a conscious soul infused, purified, transformed personality. On the higher level that is what the Five Dhyani Buddha are for. How does one apply these Buddhas in one’s spiritual daily disciplines? In meditation, one transfers the conscious entity identified with the personality thought-form, replacing it with a Divine thought-form of one of the appropriate Buddhas. Using ‘kriya-shakti’, visualization, the aspirant visualizes that they become one of these Buddhas, focusing on form, color, and quality of a particular Buddha. This transference, in time, intensifies one’s spiritual vibration when contact is achieved, purifying the lunar pitris, and the aspirant takes on the solar qualities of one of these Five Buddhas. Such a discipline is for those more advanced souls who are willing to actually go beyond the confines of the personality. The 5 Dhyani Buddhas are Divine Seed thoughts within the greater mind (mahat) of the Logos. The seed thoughts the Master Dk gives out in several of his books are just a stepping stone, and though they convey much, they are on a much lower vibration than the 5 Dhyani Buddhas. Thus, the Master Dk in his great wisdom recognizes that few aspirants can go beyond ‘words’, so he hides this more esoteric knowledge in plain sight. He even tells you he’s doing this, but again few read between the lines. Many times, when I’m studying the teaching of the Master Dk, and after reading some passage, it dawns on me that he’s actually referring to a particular teaching in Vajrayana, a deity, or Yoga systems, which immediately gives me a totally different insight into what he is teaching.
Going one step further, many aspirants are eagerly awaiting the next revelation of esoteric teaching. The Master Dk points out in Rays and Initiation, Vol. 5 pg. 255, teachings planned by the Hierarchy:
a) Preparatory, given in 1875 -1890 …written down by H.P.B.
b) Intermediate given in 1919 – 1949 …written down by A.A.B.
c) Revelatory, emerging after 1975 …to be given on a worldwide scale (the text says via radio). Now internet?

There are those who believe that a new teaching will appear after 2025. In fact, the new teaching for the West has already been given out, to a few disciples who are being trained and are slowly organizing the teaching. Those that will carry it forward are a group of advanced disciples who were born around 1990, who are now being trained. The teaching that they will give out will appeal to aspirants and disciples born in that same period and after in the two-thousands. This teaching will go further into the teachings of the East, employing Divine thought-forms such as the Five Dhyani Buddhas. Also, presently, those who concentrate on the teachings given out through the books of A.A.B, where mantra and seed thoughts are given out in English (and translated into other languages), new disciples will have been initiated into employing certain mantra in their original Sanskrit that are connected to the Trans-Himalayan brotherhood. This is an essential part of the plan that will continue the slow transfer of the Wisdom of the East to the West. A final hint, later disciples will learn how to directly align to the ‘flame of the Logos’, and when that happens, the teachings of the Tibetan Master Dk will be seen in a totally different Light.