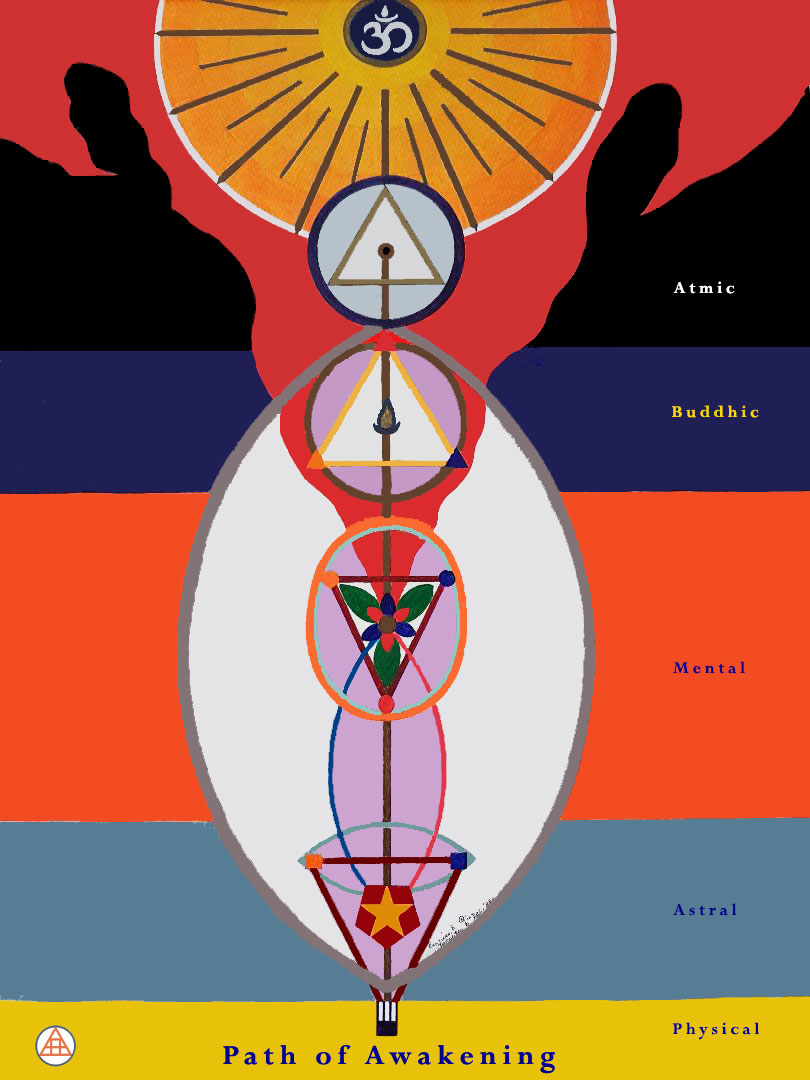 You have decided to make a long trip to a destination that you have never been to before, you realize the necessity of proper directions, even a map that shows you the way to your chosen destination. You don’t think twice about this, because you do not want to lose time wandering in the wrong direction. It is the same with the Esoteric Path, first you need to know where you want to go, what you want to achieve, what tools to take along, how to apply them along the route, and of all the tools that are available, which one’s best suit your needs. It’s also important to get directions on which tools you need and how to apply them. Its important to find someone who has already achieved a degree of success using these tools, and accomplishing the results that you are focused on achieving.

What constitutes a spiritual map? There are 2 aspects; 1) map of the human psyche – fulfilling ancient dictates – ‘Man know thyself’, and 2) map of the stages on the path one has to traverse to achieve their goal. We will begin building our map of the human psyche based on ancient occult teachings that see man very differently than modern psychology. To make this map more thorough, we will integrate teachings from more than one esoteric tradition. It is always good to be inclusive of various traditions, as no one spiritual tradition is totally complete. The esoteric path, though in essence is simple, but in actuality is very complex just as each human is a complex psychological being. Most modern psychologies only view a human being as a product of their environment, mentally and emotionally, relative to the present life and all that it entails. The concept of the soul and past lives, or even the idea of spirit is not factored in at all. Only Jungian theory hypothesizes a collective unconscious that incorporates a higher aspect of humanity but this is not included as part of each individual’s psychology. On the other hand, esoteric psychology not only integrates the knowledge of the soul and spirit and the personality, but also looks at the total man as much greater than the personality living in a 3-dimensional world. Esoteric psychology sees man as multi-dimensional with the potential for self-evolution, from man in the three worlds, to a man transformed, living in a spiritual continuum, or living as a conscious spiritual reality. For the awakened soul on the esoteric path, man is a composite evolving being of the 3 worlds, 1) personality, 2) soul – jiva-atma and, 3) atma-buddhi-manas, which is the transformed soul, the spirit/monad aspect is the ‘hridaya’, or heart of the Spiritual Triad. This is man in total. Each of these psychological parts, though they appear to function independently, are in fact dependent on each other. Thus, the spirit uses the soul as a vehicle, and the soul uses the personality as a vehicle. Each of these component elements, have their own component parts, which again are dependent on the whole. The relationship of each component is based on triplicities. Therefore, as we build our map of self, we have to examine each triplicity within each part. Let’s start from the personality, which most people have at least some idea of, and work our way up, so to speak, to see what it is that makes up a human being.

Our first step is to take a look at what a personality is from an esoteric point of view. Though there are more than six billion people on this planet, all with different personalities, working and inter-acting in their perspective environments, there is in fact only 3 types of human beings. This classification is based on force directed through the form aspect, which is a result of the energy downflow from the soul conditioned by karma. If you look closely, the vast majority of humanity earns their living via their physical body; farmers, construction workers, miners, professional athletes, dancers, mail delivery, truckers, wait staff in restaurants, bus drivers, dental hygienists, laborers, yoga teachers, and the list goes on. Thus, with the vast majority, their physical bodies condition their personalities. The second group is smaller but also includes many people who are conditioned by their emotions, such as; artists, musicians, song writers, poets, child care workers, elderly care workers, preacher, stay-at-home housewives, actors, cooks, etc. With these people their lives revolve around their emotions, they are the natural ‘feeling’ people. The third group are by far the smallest, as they are conditioned by their intellect, earning a living with their brains, so to speak: lawyers, doctors/surgeons, professors, scientists, engineers, chemists, statisticians, mathematicians, bankers, to name the main ones. Everyone falls under one of these three groups. You might think this is very simplistic, and in one sense it is but it is not untrue. Of course, there are over-laps. For instance, an individual in the first group who uses their physical body to earn a living, may have a good intellect and begin a job that involves a more intellect centered focus. I was thinking of both a wrestler and weightlifter/actor both who become governors. But in general, for the vast majority of people this classification is correct. I want to point out, that from an esoteric point of view, one group is not better than another group. Whether you earn your living from your physical body, emotional body, or intellect, it makes no difference. Everyone is enmeshed in the influence of life as it drives all into activity. As we start to build our map, as the reader, you now have the opportunity to begin self-study, by analyzing your life and placing yourself into one of the three outlined categories. If your reading this then you are an individual searching for greater meaning in Life, or maybe deeper knowledge, or a building a relationship with the Divine. It’s not important how you define this inner impulse that awakens the urge to search for something greater. What’s important is that one searches, and makes the effort to explore the possibility of personal evolution. This puts you into a new category, that of a seeker after truth, a probationer, an aspirant to the sacred Mysteries. This is very important as it marks your entrance upon the Path, or onto the way of spiritual awakening. Now the Work really begins! What meditation should I do, what books or ideas should I study, and is meditation and study all that’s necessary? The best source for knowledge is the Yoga Sutras of Patanjali which are now available in many English translations. The best translations also include Romanized Sanskrit. Patanjali outlines in these sutras, how our mind functions by describing the five modification of the mind-stuff, and also how to tame the mind via the Eight Limbs of Yoga (Astanga). There is the outer and inner Yoga. Through the understanding of the modifications of the mind-stuff (Chitta) as Patanjali calls it, the student has been given an amazing tool to observe themselves. Sanskrit is the ancient sacred spiritual language of India known as ‘Devanagri’ or the language of the gods. Sanskrit is a spiritual language, and has a much greater depth than English in expressing deep spiritual concepts. It is not necessary to really learn Sanskrit, but if you want to reach a deeper understanding of key esoteric ideas, it is of value to know certain words in Sanskrit, especially when studying the Yoga Sutras. Back to these modifications of the mind, which in Sanskrit are known as ‘vritti’. These ‘vritti’ the modifications, are like waves that arise in a calm pond when an external breeze blows across the waters. The pond represents our mind, and the moon reflected in the calm waters is the perception of reality. When the wind blows and the waves arise, the reflection of the moon is scattered into glimmers of light on the water, thus these vritti interfere with our perception of reality, as the image is distorted and broken into fragments. The more the pond is agitated, the more the light of the reflected moon will be scattered by the shifting water in the pond, and the reflection of the moon, that represents reality, is totally lost. This is the state of humanity at this present time. The aspirant to the ancient mysteries wants to learn the means to calm the waters, the vritti, and again, with a mind that is now mirror-like, reflect and contemplate on the true reality.